This project is driven by a consortium of several scientists from seven institutions spread over four countries. We aim at unifying the terminology and taxonomy for hiding methods in steganography.

Therefore, our key paper (Wendzel et al., 2021) reviews both the terminology and the taxonomy of hiding patterns as to make them more general, i.e. applicable to all steganography domains. Specifically, hiding patterns are split into those that describe the embedding and those that describe the representation of hidden data within the cover object.

Have a look at our video presentation: 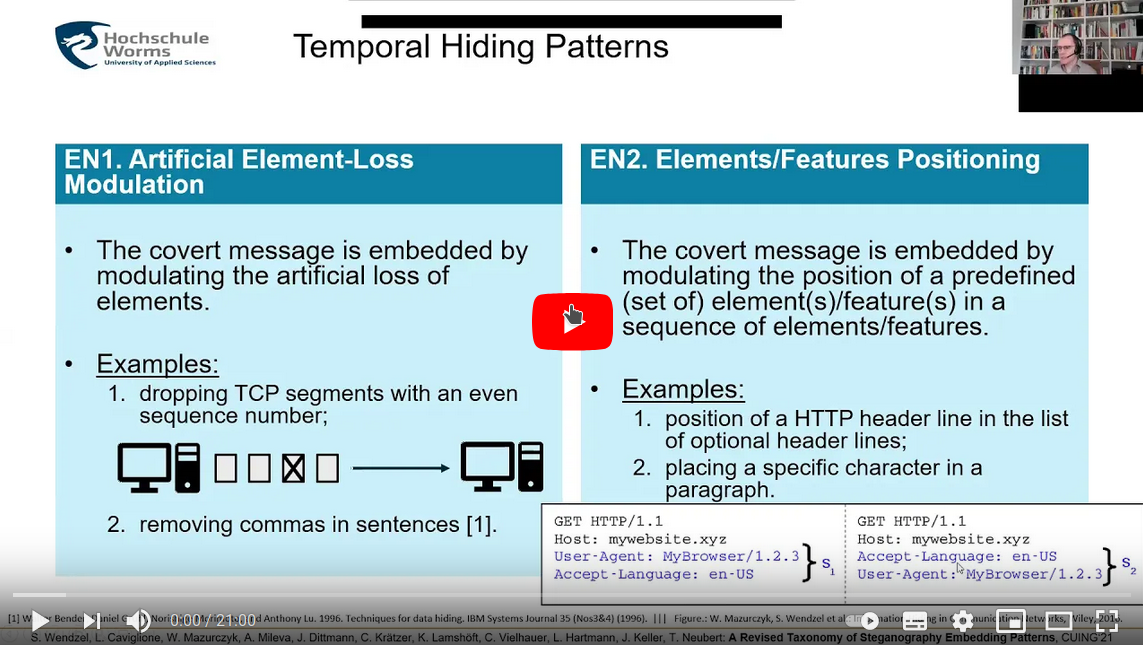 This website especially provides the pattern catalog of our latest paper to the scientific community and aims for discussion and extension of the catalog. Our pattern catalog will serve as a basis for future steganography novelty evaluation. In addition, our approach lays the foundation for pattern-based countermeasures: While many current countermeasures were developed for specific channels, a pattern-oriented approach allows to apply one countermeasure to multiple channels using countermeasure variation (see Wendzel, Link, Eller and Mazurczyk, 2019). Hence, future countermeasure development can focus on patterns, and the development of real-world protection against covert channels is greatly simplified.

What is the basis for this catalog?

We described the details of the pattern-based approach in Wendzel et al., 2015, which also provides various additional ideas related to hiding patterns, such as pattern variation and pattern hopping.

W. Mazurczyk, S. Wendzel, S. Zander, A. Houmansadr, K. Szczypiorski (2016): Information Hiding in Communication Networks, Wiley-IEEE. (Chapters 3 and 8 contain discussions on hiding patterns, basically on the basis of the above-mentioned CACM article but with an extension of timing-based patterns.)

S. Wendzel and W. Mazurczyk (2016): An Educational Network Protocol for Covert Channel Analysis Using Patterns (Poster), in Proc. 23rd ACM Conference on Computer and Communications Security (CCS’2016), pp. 1739-1741. (This work explains how our patterns can be used in higher education. You can also download our conference poster (PDF).).